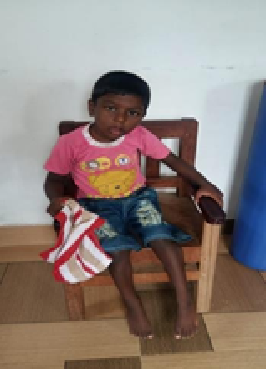 Name of the Child: Siva Selvam

Siva Selvam was born in a village Pavoorchatram. The child had a history of low birth weight and general developmental delay. His mother had a history of hypertension during pregnancy. The family is very poor and parents left Siva and his 2 siblings in the care of his grandmother. In fact, the grandmother and 3 children are essentially homeless and they sleep outdoors under a make shift tent. We were asked by a local village health nurse to screen Siva for delayed development.

When our team assessed him, they found problems in gross motor function including sitting and fine motor, cognitive and speech delays. He needed assistance with all activities of daily living. They were referred to our Melapavoor Early Intervention center and our rehab specialists did the initial assessment. They diagnosed Siva with Cerebral Palsy with speech and intellectual impairment. He had difficulties in understanding and communication with others.

In early stage, the grandmother did not bring Siva regularly to our center for treatment because of transportation cost. Our CRWs started giving therapy to Siva in front of his makeshift tent home. As his therapy needs became more intensive, we arranged a van to pick him and his grandmother up and bring him to our centre more regularly where he received treatment from the CRW, guided and monitored by a physiotherapist, special educator and speech trainer.

We found many changes in the functional development of the Siva Selvam. He has showed significant improvement in his activities of daily living, he sits without support and can communicate with others. He is going to general Government School and now our CRWs visit him in his school to give regular therapy. His grandmother brought him and his 2 siblings to our parent get together / workshop and his grandmother shared her story with other parents and her 3 grandchildren performed in the cultural program and received a standing ovation.